Today during my presentation at BesidesDE we are releasing the 64 bit version of Beta3.  I couldn't be happier with this release, but today is a little bittersweet for me. As one giant ball of awesome, the Pentoo Linux team really isn't accustomed to failure, but every single 32 bit build I've done has resulted in complete failure.

Issues have ranged from horrifying and unexplained build failures, to building perfectly but being completely unbootable, through booting at 1983 speeds and every command simply returning "segfault".

That said, for those of you that don't have computers from 2003 will LOVE the updates in beta3.  The installer has been reworked so that it, ahem, works.  Additionally a number of tweaks to improve updating and system customization have been made. We have shiny new wifi drivers, shiny new video card drivers, and all your favorite password crackers updated and ready to rock out.

I've already begun picking up the pieces of my shattered 32 bit build and I promise all you people who got suckered into buying eeepcs that I have not given up.  Pentoo Linux does work fine on 32 bit (we have a number of users doing it now) but there is something wrong with the building of the iso that I will have to work out.

We at Pentoo Linux are very proud of this work, we hope that you enjoy using it as much as we did making it.

As many of you know I promised a new beta, with both 32 and 64 bit versions, in time for Bsides Delaware.  For those of you not in the know, that conference starts on Friday this week.  Well, I have good news and bad news.  I've spent the last few months very busy trying to kick out some special things to improve beta2 enough to call it beta3.

The first thing I realized that to accomplish anything worth doing, I was going to have to compile on something a little faster than my i5 laptop.  So, I spoke to a few friends about options, and finally settled on a a set of specs that DigitalPsyko wrote up for me.

After roughing out the plans for the computer I had to take a quick break and shoot down to Louisville Kentucky for Derbycon 2012.  If you have never been, it truly is the best conference ever and worth every bit of your time...and not just because they are silly enough to let me talk about whatever I want to.

This year I spoke about how the hacker community needs to get off their asses and contribute instead of just leaching, you can watch here and share with your favorite people who are always working on cool stuff and not sharing:

After Derbycon finished, I got home and spent a few $$'s to build this: 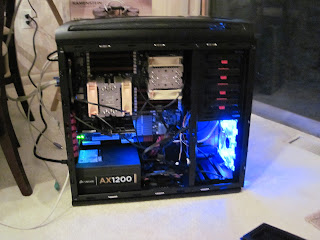 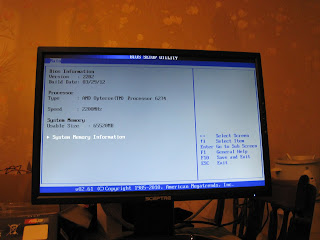 The blue led fans came with the case and have been removed for better anti-gamer styling.

So once I had a cool little build box I started getting to work, only to find the incredibly crappy OCZ Revodrive PCI-e SSD failed. I've since replaced it twice and still have no working ssd for the box. Don't buy SSDs from OCZ, Newegg won't even refund my money because OCZ is such garbage they refuse to do anything at all now. Fortunately 64GB of RAM means I can put enough things in RAM that the old hdd I'm running off of for now.  A little embarassing to build a 32 core box and drop a random crappy spare 250GB hdd in it, but at least it got me building.

It's been a few weeks now with the new box, and let's just saying being able to build this many parallel processes means not only is it way faster to build, it's also way faster to fail... and boy how does it fail quickly.  So many parallel make bugs found, and bad dependencies, I've even managed to find a few filesystem bugs.

The good news is that this morning I tested a very functional amd64 build that I was going to call beta3, the bad news is that the corresponding x86 build couldn't even boot. In a day or two hopefully I'll resolve the issue with the 32 bit build and drop beta3 on all of you.  Until then enjoy my Derbycon 2.0 talk, and wish me luck.

PS> Please don't try to comment on the blog, I really don't read it much.  We have a bug tracker and IRC where I and the rest of the team are very responsive.
Posted by Zero_Chaos at 5:30 AM

It's my favorite time of year again, the really short lul between Defcon and Derbycon.  I've used my freetime to polish up all the bug reports from our Defcon Beta release and kick out a shiny new release. Many surprises await you, but I'm not building up a bugfix beta more than I already have.

Live to Hack, Hack to Live.  If my dedication isn't obvious, today is my Anniversary but here I am uploading betas, etc ;-)

You will not find a team of volunteers more dedicated than ours, so test the release and submit bugs so we can make it even better for you.

We are really doing it this time folks, we are really making a release.  Thanks to my whole team we are rocking brand new and shiny everything.

This beta was made in haste, during defcon, while holding my laptop and walking around the con while it was compiling.  I can't believe the poor thing didn't melt in the Vegas afternoon sun.

I'm not going to say much here, except please try it.  Download the iso, and don't waste your time telling us we are awesome (we already know that) or that we suck (go back to ubuntu).  Instead, if you are going to spend some time writing us an email, please tell us what is missing, and what is completely worthless to you.  we have included as many tools as possible in this release for all kinds of pen-testing, but I'm sure I've missed a few, and left a few old/crappy ones in and we need YOUR input to make Pentoo better.

No more putting off for tomorrow what you can hack today, begin the revolution:

Arise from the ashes

We are still here folks, I know it's hard to believe.  There has been a lot of life keeping us busy, Grimmlin is now a proud husband and father (in that order and more than 9 months apart), and I am flying ~200 times a year for work. Many things have changed, we moved our bug tracker and svn (I still hate git) from pentoo.ch to googlecode, and we have significantly tightened our integration into gentoo.  About 6 weeks ago I was officially welcomed into the development team for Gentoo Linux, so my time has been evenly split between pushing critical packages and fixes up to Gentoo, and building live cds for development testing. Given the fact that I have never done anything like this, it has been a rough ride, especially since I've been building on my i5 laptop ;-) At HOPE I ran my mouth a little bit, and suggested I would have a public beta available for Defcon, which currently looks like it simply isn't going to happen.  Been a little too busy with fun things and not so fun things and just plain stuck on a few bugs which prevent the build from going properly.  None of these problems are major, and as such please stay tuned after Defcon.  Gentoo has promised a new release of a few things I need around July 30th so I should be able to kick out a nice public beta some time in August.

Just as a teaser, here are things which are already complete:

1.)New "pentoo" profiles which allow you to use hardened or not at your choice (who wants to be soft?)
2.)Full gpu cracking support for both cuda and opencl on both amd/ati and nvidia hardware including but not limited to pyrit, johntheripper, oclhashcat-plus, oclhashcat-lite
3.)Shiny 3.4.2 kernel (hardened or not)
4.)Full support for the ubertooth hardware (also added to kismet and wireshark)
5.)New radio category for sdr hacking for things like the rtl-sdr and Ettus USRP devices.
6.) 64 bit version (32 bit is a low priority until after the beta starts, sorry if your hardware is that old/crappy)

Things which are planned in a short order:

1.) Full arm support
2.)Openbts, for when hacking wifi just isn't cool enough to get the girl ;-)

Again, these are the short lists, the real changelog and planned features are mostly hiding in our >3000 commits in svn.  This will be a gem folks, if you have ever wanted a no-nonsense pen-testing distribution, this will be it.  Our aim is to be the rulers of this planet, even if only in our own minds.

See you soon, we will be talking again when we rock your work.

PS> I'm hiding out in Vegas in the Wireless Village at Defcon XX so stop by and let me know what's on your mind.
Posted by Zero_Chaos at 8:41 PM 1 comment: